Doubtless there are none of us who know from whence came the name "Slim Princess."  Some thought from the slim rails that extended over the 300 miles, but to most the name was accepted from the sentiment it bore. 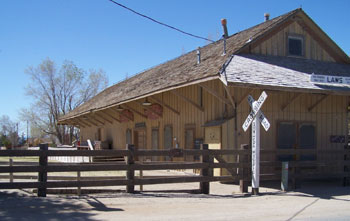 Since that day in April 1960, when the last train arrived at Laws, there were those who dreamed of preserving the site, against adverse conditions.  It now appears that program of preservation and restoration is at hand.
There are those who have passed the station, occupied with their thoughts, and scarcely giving it a glance.  They were in the minority.  Among the others were: the retired engineer who stood by Old No. 9 remembering the day his hand was on the throttle...the elderly couple who stopped to recall the day, a youthful bride-to-be was met at the station...a former valley rancher from a piece down the track whose thoughts included days of long ago when the little engine whistled his milk cows off the tracks...the ex-sheepman paused to let his mind drift back to when he had loaded sheep at his site for shipment to northern markets...the salesman, banker and miner who had stepped down from the coach after a long hot ride, to take their place in a new community...the soldier who had waved goodbye as he departed for the war and many, many others who would be pleased if the depot and "Slim Princess" could be retained for future generations to view and enjoy.